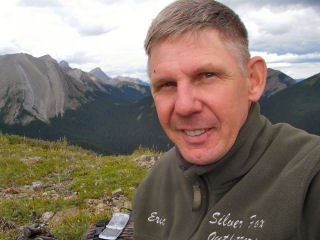 I’m Eric Rauhanen with Silver Fox Outfitters a full-time outfitter here in Edson Alberta Canada. I was born in ’59 in Winnipeg MB and raised in Sudbury ON where I learned to hunt moose with my father, uncles and brothers. All my early years hunting was done by boat and then canoe portage to  2nd lake where we called in moose or still hunted them. My brother Kenneth and I learned to call and still hunt very carefully, we tagged many moose. All our tagged moose were carried out on our backs. In ’77 I joined the Canadian Armed Forces and served for 21 years, retiring in ’98. I was a weapons technician first on F5’s and the then F18 basically loading weapons onto these aircraft. During this time was also blessed to be given the opportunity to become a member of the Canadian Biathlon Team from ‘’83 – ’88. Many people helped me “thank you to them all.” I represented Canada in many World Cup and World Championship Biathlon Races. During this time I became Canadian Biathlon Champion for 4 consecutive years from ’83 – 86. In the spring of ’88 I was ask by Oliver Hannula “of ’grizzly bear and sheep hunting fame” from Hinton AB to guide some bear hunters for him. We did great and my excitement about guiding grew. That year outfitting laws changed and Oliver retired. I then went and worked for Bruce Hartum from Fox Creek / Little Smokey. I worked for Bruce until he died of Carbon Monoxide poisoning in his house. I then got my own outfitter license and have been outfitting hunts since ’96. Since ’98 I’ve been a full-time outfitter. I don’t have any other job; I spend my entire time working on getting clients and then them their game.

After retiring from my military service I moved to Edson AB the center of my fall hunts so that I can stay current with all trends of game movement and number fluctuations. I currently live about 15 km outside of Edson on acreage with my girlfriend Judy our old dog Chloe and cat Mineau. Since ’96 I’ve run around 1700 hunts with over 810 bears and 340 moose tagged as well as many elk and deer. I look forward to you being one of my future clients. I took up bow hunting in ’88 and have tagged numerous animals locally and even made 2 trips to South Africa to bowhunt there. I’m a regular and voting member of the Pope and Young Club as well as a Life member of the Alberta Bowhunters Association. I also sponsor the winter indoor Archery for the local Edson Fish and Game Club. I don’t get as much time to hunt myself as I would like because of guiding and outfitting but I try to make the most out of every opportunity. 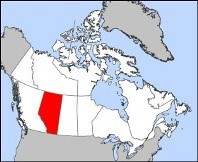